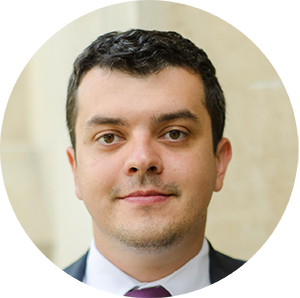 Ioan reads, writes and lives science fiction. Ioan is a founding member a stealth start-up in California. In early 2016, he was the first Romanian selected in the Visioneer Program at the XPRIZE Foundation. XPRIZE is catalyzing radical breakthroughs for the benefit of humanity, guided by thinkers such as Peter Diamandis, Ray Kurzweil, Elon Musk and others. Here, Ioan developed the upcoming Avatar XPRIZE, raising $25 million and gathering an ecosystem of industry leaders in Robotics, Virtual and Augmented Reality, Artificial Intelligence, Sensory Technology and others in the United States and Japan.

Before moving to Los Angeles, Ioan worked as an independent strategy consultant across the EU and also worked at Deutsche Telekom, where he led strategic projects in internal and extern innovation. Before DT, Ioan worked for several years as a management consultant at A.T. Kearney and PwC, where he focused on market entry strategies in Central Eastern Europe.

Ioan holds an M.B.A. from University of California, Los Angeles, and an M.A. in Geopolitical Studies and B.Sc. in International Economics from the Bucharest Academy of Economic Studies. While at UCLA, Ioan was also elected by 13,000 people to serve all graduate and professional students, coordinating the institution’s budget and liaising with state and federal officials.

Ioan always appreciates a good nerd-out around science-fiction in general and Star Trek in particular, and in recent years he developed a passion for low cost travel off-the-beaten path.